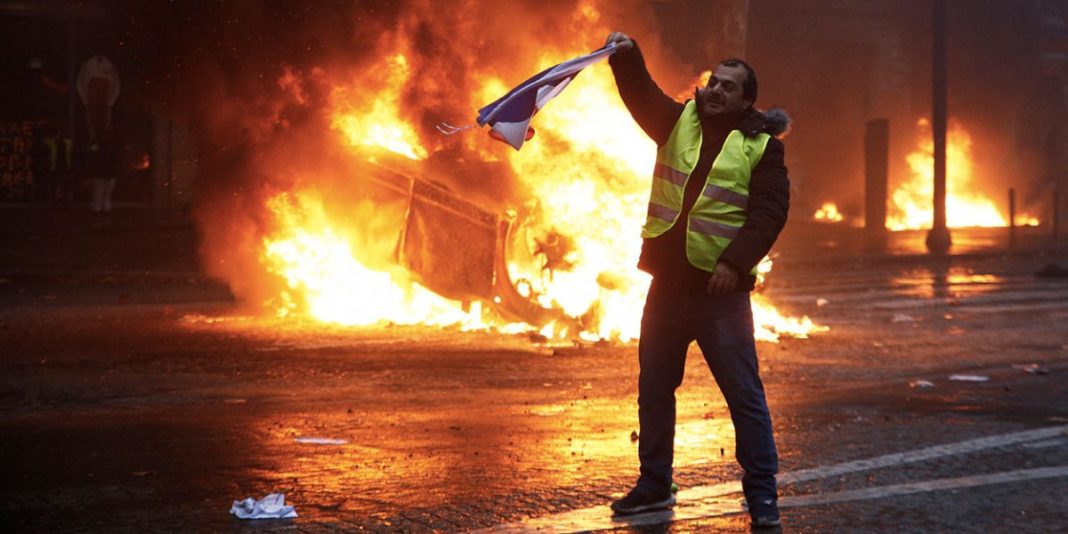 France’s “gilets jaunes” protests of December 1 were marked not only by their anger and violence, but also by the variety of those taking part. The violence of the protests – named after the yellow vests worn by those on the streets – is partly the work of extremist, anarchist groups pursuing illusory political goals.

Others involved are casseurs or “wreckers”, who’ve inserted themselves in the movement to fight the police and loot stores for the appeal of doing damage and the lure of personal profit.

But it seems that some of the gilets jaunes themselves wanted to fight. Above all, they are expressing their anger out loud.

The protesters consider themselves as “the people”. Their motives – which include falling purchasing power and rising taxes – are often coupled with frustrations about the gap between the French government and its citizens. This theme has come out in the choice of sites targeted in the violence – the Elysée presidential palace, administrative buildings, banks and luxury shops.

Many of those protesting feel neglected, oppressed and dominated. For the most part they’re employed, but their incomes often don’t meet their needs despite the exhaustion they feel from their work. The simple promise of being able to live off one’s income is no longer being kept. It’s no longer possible for somebody to lead their life as they please, or to make their own choices. How can the ideal of autonomy be achieved if the riches of society aren’t shared out more widely?

These are the sentiments felt by couples who say they “can’t get by” despite having two jobs, or young workers who still live with their parents because their income is insufficient or too unstable for them to move out.

The anger on display in the protests stems from this impossible equation. And since the collective notion of social class has disappeared in France, this anger is now being experienced on a personal level. Difficult living conditions are now more a matter of personal experience than a condition of class.

The anger from within

Religion has long sought to control anger by placing it among the deadly sins. Yet, as French society has become more secular, religion is no longer working to hold anger back.

French society is also made up of people who think of themselves as autonomous. Today’s important relationship is with one’s self – there is a value placed on authenticity, on personal development, or on listening to your own body.

As the distance from those who govern us increases, it’s become convenient to listen to ourselves and our emotions much more. The success of emoticons in messaging apps and texts are a clear sign of this, and personal feelings are now guiding our lives in thousands of different ways.

In this context, anger is understandable because it’s experienced as a moment of internal connection or clarity. I am even more myself because I am angry – because I’m as close as possible to the inner fire that animates and illuminates me. The pronoun “I” actually fuels this anger. It’s a form of self-expression, like a work of art is for an artist.

At the barricades, or on animated conversations on Facebook, people have the opportunity to meet others with whom they can share and multiply anger that has only been experienced personally until now.

Political parties and trade unions also once controlled and channelled this anger. Now, they no longer can. They’ve been accused of trying to use the gilets jaunes movement or even trying to subvert a point of view that’s deeply personal. Those in power are confronted with groups of people acting individually, some of whose self-esteem is centred around their anger.

As the old saying goes, la colère est mauvaise conseillère or “anger is a bad counsellor”. New perspectives and alternative ways forward are urgently needed. There are few tangible signs that the anger of the gilets jaunes is being taken seriously, and this is perceived as a sign of contempt – not for the organisation, since there is none, but for each person wearing a yellow vest. That will further fuel their anger.

In the face of many individual experiences that have sparked such anger, it’s necessary to explore and develop rational arguments. At the same time, we can’t forget how each person wearing a yellow vest experiences his or her own situation. It won’t be possible to achieve the first without the second.

Learning to be oneself

When the anger subsides, France must learn lessons from the unprecedented gilets jaunes movement. The crisis of representation is deeply affecting the way people are defining themselves politically.

In an appeal published on December 1 in the French newspaper Journal du Dimanche, a group calling itself the “gilets jaunes libres” called for regular referendums on large social issues and proportional representation at the next parliamentary elections. This is not surprising. Other ways of moving forward need to be explored, including establishing representative groups drawn at random from lists of voters – a process known as sortition.

From the point of view of citizens, work is needed to be done to better understand the place of the individual within contemporary society. Everyone has a claim to construct their life in the way they want to – and this is an essential source of liberation. We are fortunate to live in a society that opens up so many opportunities for us all – one that’s a long way away from the rigid social restrictions of the past.

But this freedom cannot be without limits. It involves participating in the community and caring for others. How can France bring together individuals who think they are autonomous but who have to live in a world of finite resources? It is this dizzying question that we must answer, each and every one of us.