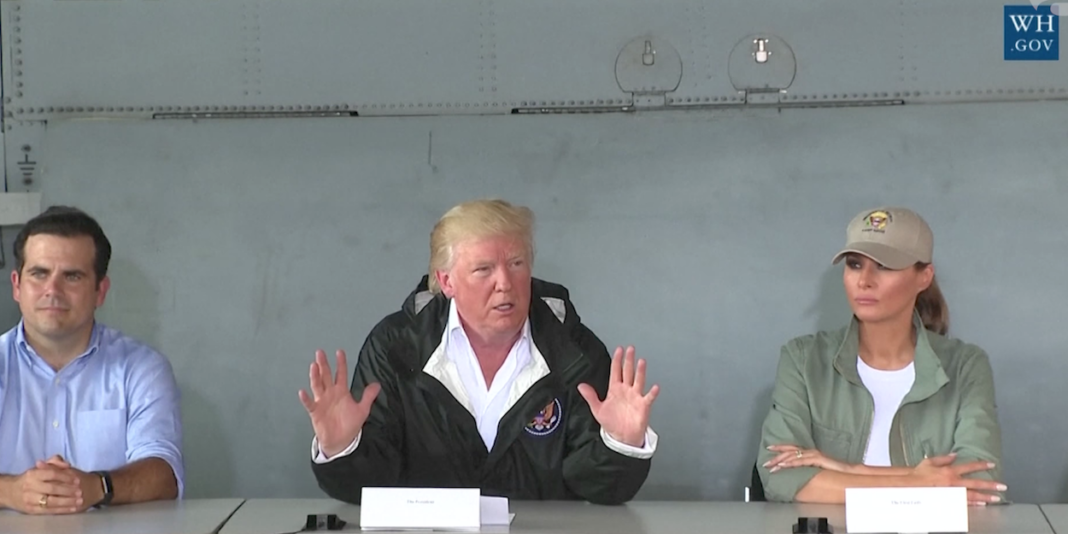 Calvary Chapel Evangelical Church in San Juan, Puerto Rico has become a relief aid centre since Hurricane Maria devastated the island 2 weeks ago. The church was also where President Donald Trump brought his unconventional style to handing out aid to the hurricane victims. He began by throwing rolls of paper towel into the crowd, and then dishing out a few tins of canned meat before exclaiming, “never seen that before”. The crowd seemed more interested in taking selfies with the president and filming him on their phones, than taking the handouts. Trump then stopped and turned to the cameras behind him to say, “There’s a lot of love in this room.”

Two weeks before Trump’s visit, Hurricane Maria ravaged the island, leaving it entirely without power, very little clean running water, destroyed roads, buildings and homes. During these past 2 weeks, Trump has been criticized for not responding quickly enough to the island territory, most notably by San Juan’s Mayor, Carmen Yulin Cruz. After an urgent, public plea for help from President Trump, in which she accused the administration of “killing us with the inefficiency“, Trump responded via Twitter criticizing her of “poor leadership”.

Trump seemed to spend much of the time defending the White House response to the disaster. He started by offering his administration an A+ grade for its disaster relief efforts in Texas and Florida, adding that Puerto Rico was “right up there with them”. At one point he handed out flashlights while saying, “you won’t need those anymore.” Maybe he misheard that power had been restored to less than 7% of Puerto Rico, and thought that just 7% were now without power?

And to encourage the Puerto Rican’s further her rounded up by telling them how much this was all costing: “Now, I hate to tell you, Puerto Rico, but you’ve thrown our budget a little out of whack because we’ve spent a lot of money on Puerto Rico…”

With half the population still without clean drinking water and an increasing number of reports of people without food, shelter and medicines, it’s hard to see where all the money has been spent. And it seems the only people who are satisfied with the response to the Puerto Rican crisis are White House staff…

The Hernandez family home’s roof was ripped roof off during the hurricane. Edwin Hernandez patched the roof over one of the rooms so that he, his wife and their two daughters, ages four and five, could have some shelter at night. With tears in his eyes he told CNN News: “I just tell them that it’s gonna get better, we believe in God. We believe we’re gonna get back up.”

When all was said and done San Juan’s mayor had one hope: That the government had seen the reality happening on the ground compared to what they said was happening.